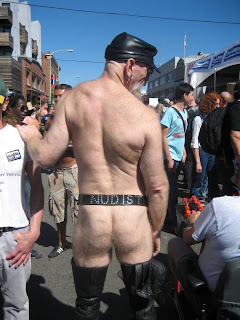 It is important to know how to accessorize.
Posted by woody at 5:35 AM No comments:

the Dream That Got Away

As a young boy, fantasies of adulthood life were fueled by a ready supply of idealized role models waiting in the wings of my vivid imagination. Asked what I wanted to be when I grew up, and I had a ready answer which would change from day to day, sometimes from hour to hour. In retrospect, my choice of daily activities were an even greater, if less articulated, indication of what the future could hold. It seems obvious now that one of my great interests was archeology and the exploration of history. I was forever excavating the yard for remnants of earlier times and was fascinated with anything old, the more worn the better. When my digs were unproductive I was undeterred, I would then bury things to ‘find’ the next day.
My best ‘ digs’ took place in my parents bedroom when they were away from the house, however. I adored rooting through the big cedar chest under my parents front windows to see the treasure trove hidden beneath the blankets, newspaper clippings, photos, risque Christmas decorations . . . One moment of discovery stands heads above the rest. One afternoon I discovered, entombed in the bottom of my parents gun cabinet buried beneath boxes of shells, a double record album -- The Best of Judy Garland. Now, this would be somewhat akin to finding a copy of Penthouse on the Pope’s coffee table. I mean, my parents listened to nothing but Johnny Cash and the Carter Family and religiously tuned into HeeHaw and the Grand Ol’ Oprey every week. Perhaps that album was magically secreted there by some great Queer spirit who was looking out for this lost boy growing up in a mid sixties town with a dearth of Queer role models or sensibilities. Regardless, I listened to that album, and my life was changed. I could feel the warm richness of Judy’s voice reaching out to me, caressing me, comforting me, making me laugh and cry. Yes, I kept that album. Who deserved it more? My parents who left it buried in the dark, silent in the bottom of their gun cabinet, or me, who played it hour after hour, enraptured? I think the answer was clear!

I became Judy Garland. The next album to appear was the double Carnegie Hall Concert album. I knew the albums forwards and backwards. When my parents went away, I would put them on their stereo downstairs, crank it up and be Judy Garland performing at the top of my lungs, until I discovered that the neighbors could hear me. I sang those songs everywhere I went. I would go on walks around the neighborhood -- just to sing and pretend I was Judy Garland!
As I got older I realized that my being Judy Garland had to be a bit more discreet, but boy, I still loved the idea of belting one out. I owned every record I could find, bought every book that appeared. I was the only person I knew who even remotely liked Judy -- until I moved to San Francisco. Low and behold, I found other men who liked Judy as well! But my days of fantasy were it seemed over. I mean, it just wasn’t healthy to obsess so over one woman. Yes, yes, I would still listen every once in awhile, I bought the television show when it appeared on DVD, and all of her movies, but no more did I stand in the middle of the living room with my pretend microphone, the stereo blaring, and become Garland on stage before my adoring masses! Last week I discovered, ‘digging’ through Amazon, Rufus Wainwright’s Rufus Does Judy at Carnegie Hall. WOW
! Here is this man, living MY fantasy, live, on stage, in front of real people! Amazing. Even the li
ner note photographs are Rufus posing like the photos of Judy on the original album. How fantastic! I am not alone, not then, not now, nor will I ever be! And fantasy IS important. I was living in shame, managing my stigma by hiding it!

Never be ashamed. Don’t let your dream be the dream that got away!

On my way to my first class of the semester, Gay Male Relationships, I descend the stairs at Harvey Milk Plaza to board the inbound MUNI train. Inside the station new display ads cover the walls -- catch my attention. They are all close ups of male couples in differing poses suggestive of romantic attachments. The copy on the ads state this dating service, “Partner for Life,” is better then “M4M,” it is “LTR.” “One night stands are great, 365 are Better” declares one ad. I look to the other side of the platform. Yes, the ads are repeated over there as well. All of the display ads at the Castro Station are taken over by “Partner for Life.” All of the ads promote the message that partnering for life is ‘better’ than any other choice. My train arrives at the next stop, Church Street, where I alight, where there are no display ads proclaiming the superiority of partnering for life.

Walking to my class at the GLBTQ Center, I consider what this means for me. While I haven’t traveled to all of the other MUNI stops, I wonder if these ads appear elsewhere. Are we as a community still so ghettoized? I feel these ads which seem targeted at what is perceived as the “gayborhood” are engaging in furthering the attempt to construct and regulate a “safe” arraignment of what gay family and gay sex means which will be more palatable to the larger normative culture at the exclusion of alternatives within the community. Should it be the job of a dating service to become the promoter of alternative views. Not necessarily. However, I see a pattern here which repeats again and again, from the presumptive insistence that marriage equity is the goal of the entire community to the censorship of a more open and vital sexuality by institutions within the community such as the GLBTQ Center itself, which has taken it upon itself to filter internet access, censor art shows in its space, and outlaw nudity within the Center. I read my first homework assignment for my Gay Male Relationships class, which deals with “Chronically Single Gay Men,” and I learn, “ . . . there are more men looking to be in relationships now than in the ‘70’s. ‘Some of this is an evolution of gay male culture away from the revolving sexual door that characterized so much of the era of the sexual revolution . . .’.” This trope becomes repetitive. When questioned by the Bay Area Reporter concerning the rule banning nudity at the Center the director of the Center responded by saying he felt there would have been a time when you would not have been able to make such a rule, -- now the ability to make such a rule was a sign of the gay communities evolution, its maturation.

When we perceive changes in a community as a maturation or an evolution we are hierarchizing behavior. In claiming that a new behavior is somehow better than the old what we are really doing is governing others sexual behavior. We are engaging in a subtle sexual shaming. Gayle Reubin, in her essay “Thinking Sex,” suggests that hierarchies of sex serve no real purpose except to prevent sexual variance.

The “normative” sexuality, typically and historically post-marital monogamous heterosexuality, has the luxury of maintaining invisibility by the very nature of its dominance. It has the luxury of seeing its sexuality reflected back to itself everywhere, from automobile ads to Hollywood film to Literature. Their sexuality is constantly being reenforced at the same time it assumes a visible invisibility by the very nature of its universality. It is in this way the dominate group may deny its own sexuality, may remain inconspicuously sex-phobic. Any variation to what is perceived as normative suddenly becomes not only visible, but prurient.
When the LGBTQ community condescends to the idea of an “evolution” in its behavior or a belief in a type of sexual expression which is better than another, it seeks to cleanse itself of the stigma of queerness placed upon it by the hetero-normative culture by engaging in the marginalization, shaming, and stigmatization of members of its own community in the very manner in which it has been marginalized, shamed, and stigmatized by the dominate group.

The fact the the ads for “Partner for Life” only appear in the Castro Street MUNI station is irrefutable evidence that the “evolution” of LGBTQ sexuality has not normalized to the extent that it may co-exist along with the invisibly visible dominate heterosexual sexuality.
Posted by woody at 10:33 AM 2 comments: