The weather has been hot for San Francisco, lovely Indian summer weather. Sunday morning I left home at 10:00, heading for the Folsom Street Fair, wearing my boots and my hat. I had a great time at the fair, saw many wonderful sights and many lovely friends. Still in boots and hat, I made my way back to my boyfriend's house. I finally went home Monday morning at 7:00 still wearing only boots and hat. 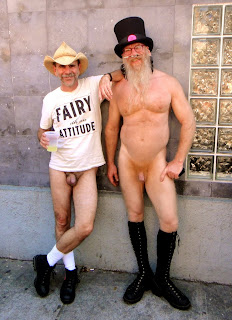 Monday was a school day, but as soon as I exited the Muni station at Castro and Market Streets, the clothes came off. I spied my friend and fellow nudist activist George Davis sitting at the Castro Commons, so I joined him for a while. Eventually we were joined by a gentleman I had met Saturday at work who was visiting from Boston. He shed his clothes and joined us for a while as well.
Walking towards home, naked , I spied my friend Naked CJ and one other naked man in front of the Starbucks on 18th Street, so I stopped by to say hello. I then proceeded to walk home up 18th Street naked.
This is how life should be.
Posted by woody at 7:52 AM 1 comment:

In wildness is the preservation of the world. 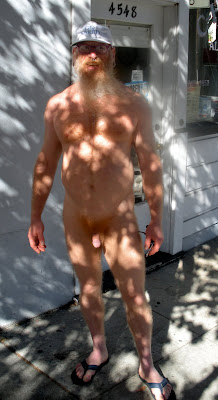 "We cannot adequately appreciate this aspect of nature if we approach it with any taint of human pretense. It will elude us if we allow artifacts like clothing to intervene between ourselves and this Other. To apprehend it, we cannot be naked enough."
~Henry David Thoreau
Posted by woody at 7:49 AM 1 comment: 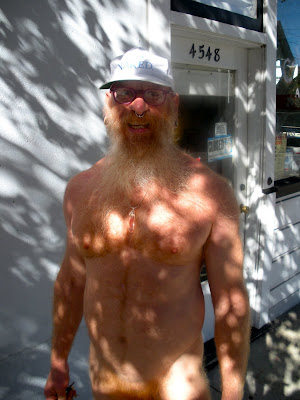 The world I inhabit feels toxic, tastes toxic, smells toxic, it even looks toxic. I no longer feel I fit into this world. It is as though I elicit a toxic reaction to everything I touch, taste, smell, see. Am I toxic, or is it my world which, in becoming no longer MY world, has become toxic to me?
Posted by woody at 8:07 AM 2 comments:

Nudity as a public nuisance.

This bulletin is to clarify the requirements for arrest, cite and release of persons violating Penal Codes 314 or 372.

Penal Code 314 states: Every person who willfully and lewdly, either:

When presented with a similar situation where lewd conduct is not an element of the offense, officers should consider Penal Code 372, Public nuisance; maintaing; committing; breach of duty of removal, which states:

Every person who maintains or commits any public nuisance, the punishment for which is not otherwise proscribed, or who willfully omits to perform any legal duty relating to the removal of a public nuisance, is guilty of a misdemeanor.

A public nuisance is defined as:

Anything which is injurious to health, or is indecent, or offensive to the senses, or an obstruction to the free use of property, so as the interfere with the comfortable enjoyment of life or property by an entire community or neighborhood, or by any considerable number of persons, or unlawfully obstructs the free passage or use, in the customary manner, of any navigable lake . . .

Arresting for PC 372 will require a private persons arrest as detailed in DGO 5.04.

The incident report should describe the following if applicable: 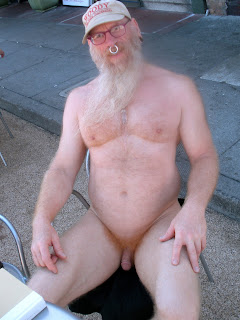 This is from the bulletin handed to me today by the LGBT liaison from the Mission Street police station who claimed he was responding to a complaint. I was sitting

in the Castro Commons, naked, reading a book. At first he attempted to inform me that I was guilty of indecent exposure, Penal Code 314, showing me his bulletin and telling me he had received a complaint. I proceeded to inform him that I knew that was not the case, and that it was my understanding that the new police directive advised officers that there must be lewd conduct involved and simple nudity did not co

nstitute lewd conduct according to the California courts rulings. He then pointed out the code stated willfully and lewdly and I was willfully. I cautioned him as to the meaning of the logical conjunction ‘and,’ that in fact it did not say ‘or.’ He then pointed to the part about Penal Code 372, public nuisance. I would have to get dressed or risk arrest.

By this time a slender female officer approached who said she had informed the complainant that in order to be indecent, there had to be lewd conduct; that in fact simple nudity was not against the law. She said the complainant told her he did not know that and would withdraw the complaint. Bless you my dear! I responded with, “Then I guess I am free to get undressed.” The LGBT liaison admitted that technically that was the case, but as soon as he received another complaint he would be back to arrest me. I said that I would just agree to get dressed again. He responded that no I would not, I had already been warned and in fact, the next time there is a compliant about me being naked in public, I would be arrested.

He proceeded to tell me how HE did not have a problem with public nudity, but in fact, the neighborhood had changed since the days it was a gay ghetto. Now there were families who lived here with children. At the monthly public meetings held at the Mission Police Station, he claims they have been receiving dozens of complaints every month from MUMC (Merchants of Upper Market and Castro) as well as people outraged over the naked guys in the Castro, demanding to know why the police do not put a stop to it? He said that those complaints filtered up the chain of command and this new bulletin was the result. He said, “The Castro is not just a gay neighborhood any longer.”

I told him that this was not about being gay, had nothing to do with being gay. He seemed a little surprised by that, asking me how so. I responded that this was about the freedom to not be ashamed of our bodies, that which makes us human. That there was nothing indecent or wrong with our bodies and as nudists we believe that we have the right to appear in our bodies just as others have the right not to.

I wonder if PC 372 is really prosecutable in this instance. It does state, “. . . so as to interfere with the comfortable enjoyment of life or property by an entire community or neighborhood, or by any considerable number of persons, . . .” (italics mine). It seems that that would be awfully hard to prove, and seems rather vague. However, I have other priorities at the moment, namely me education, to have to risk arrest and court appearances to challenge this. I truly wish that were not the case.

I often think in terms of religion, as in freedom of. What if we were Jain Digambar monks, who do not wear any clothing? In today’s world the obscenity seems to be the renunciation of our humanness, the hatred of our bodies, the view that our most precious possession is dirty, immoral, and filthy. I truly believe we need to be back in touch with our bodies, our humanness, our nature; it is our only hope for saving ourselves.