Here is a draft of the oral history project I am currently engaged in for my seminar class on the History of Sexuality in America:

“I think if anyone has a problem with [nudity], it’s their issue not mine. Because, what kind of damage is there? If they’re offended, look the other way. I might be offended by something you’re wearing, but I’m not going to complain, I’m going to look the other way if I don’t like it. So I think they should have the same courtesy.” [1]

One particularly warm San Francisco day, I found myself sitting with a friend in the newly fashioned Jane Warner Plaza at the intersection of 17th, Castro, and Market streets. I was naked, my friend was not. An older woman passed by with a little boy beside her. The boy found us fascinating. He looked, smiled, and said with that wonder only a child can muster, “A naked man!” The older woman told him, “He is disgusting!” The boy replied, “Disgusting, yea, he’s disgusting,” stopped looking at us and ran to keep up with the woman. My friend and I had just witnessed the very moment when a child’s mind is closed, when that child is first taught that what they believe to be interesting and natural, a naked body, is shameful and disgusting. Teaching this child that my naked body is disgusting teaches him that his body is disgusting as well. Many believe the time has now arrived when our very bodies deserve to be recognized and afforded equality in the public realm. There is growing resistance to the societal control which dictates hiding our bodies because some see them as shameful, dangerous, primitive, or disgusting. Exploring four oral histories, I will argue that not only has a movement for nudist equality been in ferment since the 1960s, but has also experienced what were once thought of as impossible advances in the past fifteen years; a movement to normalize the naked body in public space, to guarantee equal access and freedom from stigmatization by those who choose clothes freedom.
Given the prevailing attitude towards our bodies, it is not surprising that historians and other academics have largely ignored the nudist or naturist movement as a serious topic of study until recently. Those who do address the topic seem unable or unwilling to challenge the status quo. In Hiding From Humanity: Disgust, Shame, and the Law, Martha C. Nussebaum states that even though the rationale for laws against public nudity are weak, “many people really do believe that premature exposure to the sight of adult genitals harms children, and the intrusion on personal liberty that is involved in restricting public nudity is probably not great enough to worry about.”[2] Nussebaum dismisses the right of the body to exist in public space as inconsequential, although she sees no logical reason for its prohibition, revealing her own biases and learned prejudices. Ruth Barcan, in Nudity: A Cultural Anatomy, argues that while we might seem to possess more body freedom now with the proliferation of nudity through various media, it is always restricted by regimes of representation which privilege only certain bodies, insist on sexualizing the body, and highlight the vast differential between actual permissible bodily practices and those representations.[3] Barcan’s observations and conclusions are astute, but what both Nussebaum and Barcan fail to see is a growing movement that not only questions regimes of corporatized, commoditized representations of bodies but also demands access to equality in the public sphere in spite of social myths centered on childhood sexuality and the hysteria that subject currently evokes.
San Francisco has had a reputation for being a wide-open town, providing fertile ground for the outsider, the marginalized, and the freethinking since its initial surge as the way station to the California gold rush of 1849.[4] Andrew T. relates how San Francisco has the reputation for always being a place for renegades, as well as a place that affirms human sexuality more readily then many other places.[5] Indeed, in San Francisco the push for nudist equality, for normalizing the naked body in public space, may be traced at least to August 21, 1965, when Jefferson F. Poland, leader of the San Francisco Sexual Freedom League, along with his girlfriend Ina Saslow and friend Shirley Einseidal held a Nude Wade-In at the Aquatic Park near Fisherman’s Wharf. The group had notified the press, and reporters and cameramen were on hand as well as a crowd of about five hundred mostly male curious onlookers. Handing out fliers and holding signs proclaiming, “WHY BE ASHAMED OF YOUR BODY?,” other supporters were on hand to form a picket line. Once out of the water, Poland, Saslow, and Einseidal joined the picket line, naked. The police arrived and the trio was arrested.[6]
Almost forty years later, the nude body in public space is becoming more normalized in San Francisco due to the efforts of a core group of activists. At Seventeenth, Castro, and Market Streets on any warm, sunny day, men will come to sun and lounge naked. Men may often be seen walking through the neighborhood naked as well. Andrew T. finds what has happened there “amazing in terms of people’s acceptance and in terms of emboldening [himself].”[7] Andrew gives a great deal of credit for the success of the movement as well as his personal increased comfort level with public nudity to activist George Davis as well as events such as a dance project he participated in with the Dandelion Dancetheater. The Dandelion Dancetheater describes itself as “being situated at the crossroads of dance, theater, community activism, healing, and new performance forms.”[8] The event Andrew was involved in took place in a warehouse space in San Francisco’s Mission District around 1998. All of the performers were naked at some point during the event, and each night the event would begin with a march, led by a drummer, as naked as you dared, around the outside of the warehouse space. Some people were top-free, some were dressed, and some were naked. The dance, being about body acceptance and the exploration of who may be named a dancer, incorporated all body types: classically fit, obese, young, old, and other-abled. Walking around the block naked night after night in the mission was a big breakthrough for Andrew. Seeing people engaging in public nudity, Andrew related, gave him the feeling that he wanted to be a part of this, to be a pioneer for change.[9]

Following the release of the San Francisco Police Department’s new public nudity guidelines, an increase in public nudity occurred on the streets, especially in the city’s Castro district. According to the district’s supervisor, Scott Weiner, “Now it’s a regular thing and much more obnoxious.”[25] Supervisor Weiner introduced legislation to the San Francisco Board of Supervisors that required any unclad person to put a cloth or similar barrier down before sitting on benches or other public seats and prohibited nudity in restaurants. George Davis believes, “Wiener might as well have shot lasers and fireworks into the sky announcing that public nudity is legal.”[26] According to Steve Adams, president of the Merchants of Upper Market and Castro (MUMC), “As long as the people who come to look spend money in the neighborhood, that’s all I care about.”[27] Most of my interview subjects agree that an inadvertent effect of the new Weiner regulations is to acknowledge the lack of legal grounds for an outright prohibition of public nudity without going so far as to legalize it. Because of this, along with the many tourists’ positive responses, most of my interview subjects do not see a backlash coming.[28]
My interviews show the existence of a growing movement for nudist equality in San Francisco through the normalization of nudity in public urban spaces that has roots in the 1980s and 1990s and while having shown some significant successes, still remains fragile and vulnerable. My subjects believe that public nudity can teach the LGBTQ community that all bodies are worthwhile, have value, and are beautiful by upsetting body entitlement and looks-ism within the community.[29] Body acceptance is something everyone is entitled to, says Mitch Hightower.[30] Beginning in the 1980s, events such as the Folsom Street and Dore Alley Fairs have made the queer community aware of the possibilities body freedom presented. Through the efforts of activists like George Davis, Lloyd Fishback, Mitch Hightower, Rusty Mills, and the original five Bay 2 Breakers nudists who challenged their arrest, over time the San Francisco Police Department was forced to recognize that, in fact, public nudity was not illegal in spite of individual officers’ moral objections. People like Kevin Alves, Andrew T., myself, and others who appear naked in public spaces on a daily basis advance the movement by making the naked body visible in an urban environment, thereby normalizing the naked body in everyday discourse and commerce. We may also see how the activities of these people have indeed attached value to the naked public body; a monetary value which may be seen in the reactions and statements of business leader Steve Adams who sees the nudists as a boon to capitalism, and more importantly the value inherent in normalization, as the naked public body comes to be seen as natural and life affirming. 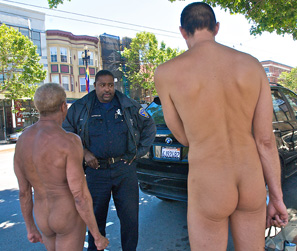 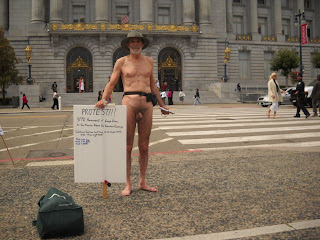