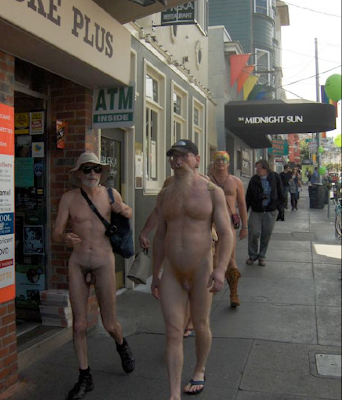 Today at 2:00 I meet up with four or five like-minded men to stage a naked body-freedom stroll through the Castro. We had on hand a video documentarian, as one of our group is hoping to produce a spot for public access television. We began undressing near the 33 Muni stop at what once was known as Hibernia Beach (B of A Beach?), across the street from Starbears, where we garnered quite a few bear stares. We proceeded down 18th St. to Hartford. Moby Dick's looked like it might capsize from the sudden rush of men towards the plate glass window to witness our parade. No sooner had we crossed to the other side of 18th St. when a police cruiser appeared, swooping in on us and pulling to a stop on the corner across the cross walk. The police officer informed us we would have to stop and get dressed as he had had a complaint. All of us complied except for our organizer, George Davis, naked yoga guy and mayoral candidate, who walked over to speak to the officer. The officer told George if he did not get dressed he would be arrested. George did not respond. The officer asked George if he should consider that a refusal to obey orders. Again silence from George. The officer told George that if he got dressed he would issue a citation, but if George did not have valid ID on him, he would have to arrest him. George told the officer that he had been issued citations before and they had always been dismissed as simple nudity was not illegal in San Francisco. The officer than proceeded to call for a wagon and took George's ID. Meanwhile our videographer was filming the proceedings. At this point George, having made his point, decided to put his pants on. The officer than told us he understood our stance, and our right to free speech, but with that right, he explained, comes the responsibility to not break the law while expressing it. We explained that we were not breaking the law, that simple nudity was not illegal in San Francisco. The officer responded that he had received a complaint, so we were breaking the law. George asked him to produce the complaint. The officer admitted he did not have it in writing, and therefore could not arrest us. By this time the patty wagon had arrived. The officer informed us that we were free to go, but if he had to return because we continued with our naked stroll, we would be arrested. George expressed that he intended to file a harassment complaint with the Office of Citizen's Complaints, which he has done each time in the past when he has been hassled or falsely arrested by the police. At this point the officer asked to speak to another member of our group in private. After the police left, that member told us the officer was afraid that George was going to claim he had tried to hit George. He said he had reassured the officer that George would not lie, but would only state what had happened.

So even though there is no law forbidding an act, one may still be kept from freely engaging in that act when it is perceived as being illegal by the public or by the police. The fear then becomes if one wants to engage in said act, will there then be an effort to make it illegal? Many nudists believe this is a sufficient argument why we should not be naked in public. This is the carceral state at its finest, self-policing at its most efficient. 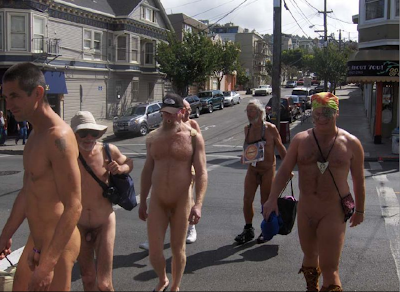 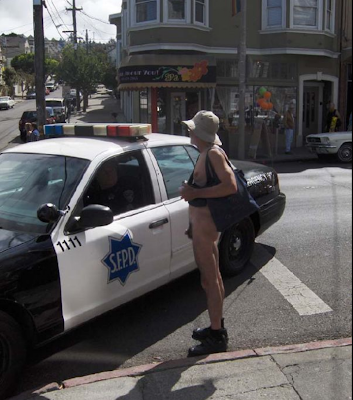 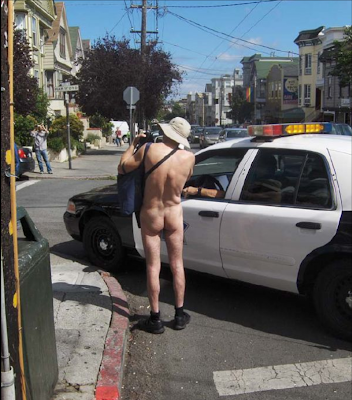 RE: Nudity in Public 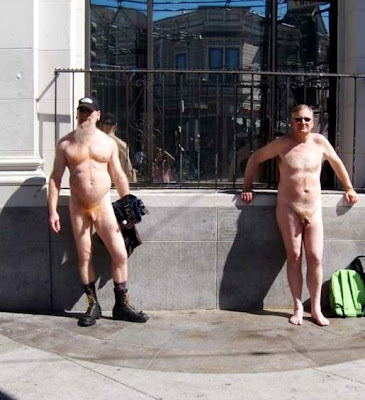 In reference to my previous posting about public nudity in front of Magnet, there have been several requests to clarify what the standards are here in San Francisco. Since I received a posting from one of my online nudist groups about this very matter today, I thought it might be helpful if I were to just copy that posting here. I am not the author of this post, nor did I check it with the authorities mentioned, however this is correct as far as my understanding of the situation at this time.

In my discussion the ADA had a short conference with a supervising
attorney AND an SF Police officer. Here is a summary of our
discussion. Please do not take this as legal advice or a
recommendation to run out naked without giving that some thought for
your self.

1. Lewd behavior is illegal and the DA's office is more than
happy to prosecute anyone in public with an erection, masturbating,
or ejaculating (list not exhaustive of possible lewd acts.)
2. There are several laws governing nudity. Basically nudity has
not been legalized (which is different from illegal – brackets my
add). So, one could be arrested for nudity absent lewd behavior. But …
3. Simply being naked in public is not something that the DA's
office is interested in prosecuting, whether in large groups (like
trying to arrest 2,000 nude folks at Folsom,) or small groups 1-5
people strolling through the Castro.
4. The police will make an arrest if there is a complaint. The
ADA did say that it would take time for the police to arrive to where
the complainant was, the complainant has to complete paperwork and
then must appear in court to give testimony about the behavior. (Not
likely that there are that many people in SF so upset about nudity
that they are going to go through all of that. Again brackets, my
add.)
5. Child Endangerment – Being nude in front of a child does not
constitute Child Endangerment. However, if the nude adult was clearly
seeking sexual gratification involving the child, (your life will get
really complicated. – Brackets mine.)

I suspect that there is nothing new here that most of us didn't
already know. However, it was very informative to chat and hear from
those who would be in a position to prosecute the case.