San Francisco City HallSan Francisco, CA
Join a group of activists for a noon-time demonstration on the Polk Steps at San Francisco City Hall. We are protesting the nudity ban and the illegal arrests of nude activists by the SFPD. This protest is a city permitted demonstration. As long as you remain on the steps the SFPD has no jurisdiction to cite or arrest you. The Sheriff's Department has already stated publicly that deputies will not cite nude people exercising their First Amendment Rights at this protest.

On Friday March 15, 2013 the Plaintiffs in Hightower v. City and County of San Francisco filed an amended complaint with the U.S. District Court for the Northern District of California challenging San Francisco's nudity ban.

"On this Ides of March, this is a reminder that prior restraints on political speech are, like Caesar, entirely mortal" said Christina A. DiEdoardo, Esq., the attorney for Mitch Hightower, George Davis, Oxana "Gypsy" Taub, Russell Mills, and Russell "Trey" Allen, the Plaintiffs in the case.

During oral argument in January 2013, Ms. DiEdoardo advised the Court that if the measure were permitted to into effect on Feb. 1 the Plaintiffs would be subjected to retaliatory measures by the City. The Court dismissed the original complaint, primarily on ripeness grounds, but expressly gave the Plaintiffs permission to re-file once the ordinance went into effect.

"As we predicted, the City has wasted no time to repeatedly and illegally arrest my clients in violation of both the Ordinance's plain language and the provisions of the California Penal Code," said DiEdoardo.

Violation of the ordinance is supposed to be treated as an infraction. Under California Penal Code section 853.5(a), a police officer is required to offer an individual who is charged with an infraction and who can prove their identity the chance to sign the citation and promise to appear at a later hearing. If the person does that, they cannot be arrested.

However, the City and SFPD have repeatedly ignored these requirements at a Feb. 1, 2013 demonstration at City Hall as well as a February 27, 2013 dance performance in the Castro.

"Since the plain language of the Ordinance and the Penal Code are apparently insufficient to compel the City and the SFPD to live up to their responsibilities, we have asked the Hon. Edward M. Chen to issue a temporary restraining order compelling the SFPD to cease these illegal arrests," said DiEdoardo. "In addition, we are asking the Court to set a briefing schedule and hearing date on our request for the court to issue a preliminary injunction against the way the Defendants have arbitrarily and capriciously enforced the law."

Copies of all case documents can be found at
http://www.diedoardolaw.com/hightower-v-city-of-s-f-challenge-to-nudity-ordinance On Wednesday February 27, 2013, at noon, Gypsy Taub, George Davis, and myself engaged in a public nude dance performance at Harvey Milk Plaza. According to Judge Edward Chen, who refused to bloc the nudity ban because "nudity in and of itself is not inherently expressive" also said that nude dancing would be considered protected speech under the first amendment. All three of us were cited for public nudity, Gypsy Taub and George Davis were arrested for refusing to sign their citations, although at the time I was informed by an officer that I would be arrested if I did not put something on after receiving my citation, which I chose to do. All three of us are planning on pleading not guilty at our arraignment.
The naked human body is natural, harms no one, and should not be illegal. 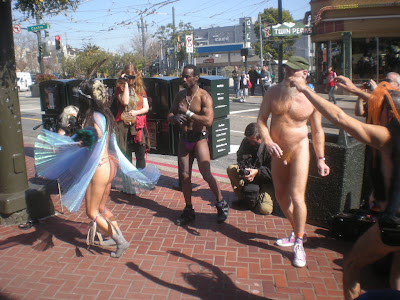 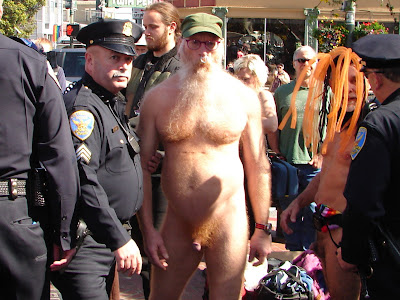