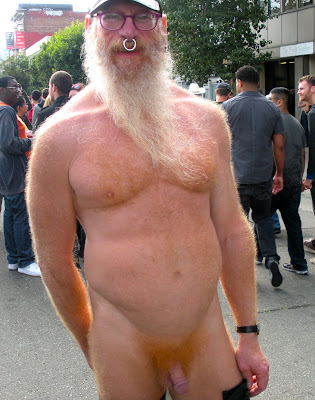 Why is it when the clothing compulsive wish to comment on a nudist's appearance, they always do so within hearing range but only after they have passed by the nudist?

This old guy, after he had passed me by, asked, "Why is it always the ugly ones?"
Posted by woody at 6:08 PM 6 comments:

My response to Ms. Saunders: Nudity only becomes inappropriate when you are taught that it is. There is nothing indecent or inappropriate with the human body. It does not hurt anyone. It is, after all, what makes us human. If people are so disturbed by the nudity of others, I suggest they examine their own body issues. Indecency, obscenity, and inappropriateness rests in your mind, not in my body. 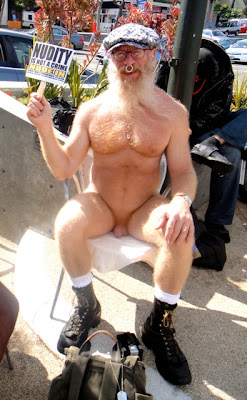 Walking naked down Castro Street I was just attacked by four television reporters with cameras who would not take no for an answer. I did not wish to speak with them, but they surrounded me with their cameras and mics as I attempted to make my way down the street. Three dear friends came to my aid. I did end up grabbing channel five's camera after he wouldn't get it out of my face. He told me I was committing a felony and he would have me arrested. Not a good scene!
Apparently they wanted my reaction to a proposed ordinance to ban nudity in SF. Anyone hear anything about this?
Posted by woody at 1:01 PM 3 comments: