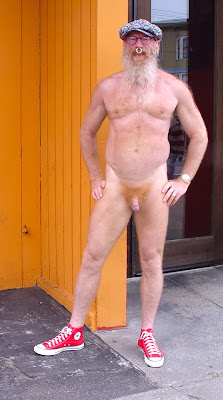 I saw my friend Naked Kevin, who was in disguise, today and he snapped this lovely portrait for me with his new camera. It was a great day for being out and about naked, feeling the breeze and mist and then later the warmth of the sun on my bare skin. It makes me feel so human, so alive!
Posted by woody at 6:47 PM 5 comments:

How can we deal with the media?

Stanley Roberts interviewed some fellow nudists and me yesterday. It wasn't until he was almost finished that he revealed who he was, and what his "news" segment was called, "People Behaving Badly." Of course, with a name like, "People Behaving Badly," I suspected he would not be unbiased in his coverage, but I did think he would at least include some of our side of the story. None of the footage he shot of us nudists speaking about why we were doing this or our ideas of body freedom and body acceptance made it into the report. The only nudist he included speaking was of course the bigoted jerk yelling at him. If it bleeds, it leads. It is also unfortunate that he must end with the bigoted comment, and his agreement to it, that only certain people should be seen nude

In this summer-break's last week before the beginning of the fall school semester, the weather has become nudist unfriendly -- cool and overcast. So I will take this opportunity to post some photos from happier, sunnier days of this past summer. I am happy to report that I spent a great deal of time out and about, naked, on the streets of my neighborhood this past summer. I am also happy to say that, for the most part, people seem to have gotten over their initial shock of seeing us nudists on the street. Sure, I still get the occasional negative comment, but I am also getting more and more positive comments or, best of all, no reaction at all as though public nudity is perfectly normal, which it should be. I am also happy to report that my beliefs about the rightness of what I am doing, my right to be naked in public, the idea that I am doing nothing wrong or shameful or obscene (yes, learned western cultural values are hard to overcome) has become stronger and stronger within me.

This coming semester I will be taking one class, United States history from 1877 until 1916 and one seminar, Crisis and Conflict in Germany - 1900. This will be my final semester as an undergrad, I will be graduating next spring with a BA in history. I am looking forward to the fall and new learning experiences. 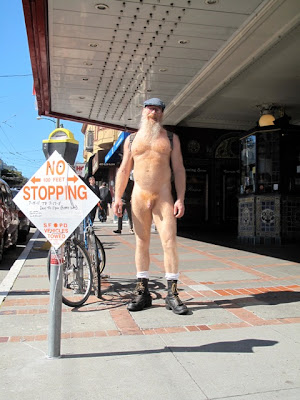 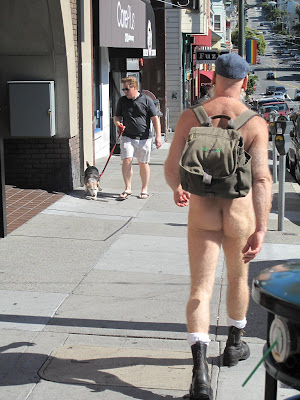 Every Sunday after work I walk to my boyfriend’s house, usually naked. I walk past Lime, a club frequented by young hipster types. Always there are large crowds of drunk kids on the sidewalk, resulting in lots of hooting and hollering as I walk by. That does not bother me. Sometimes though, they are so drunk one can barely manage to walk through the crowd. Many people in the neighborhood have complained about the noise, the inability to use the sidewalk, the lack of respect for the neighbors. This past Sunday, while walking by, I was slapped on the ass by a young woman. She was there with a young man who was so drunk he could not enunciate one clear word, was unable to even stand erect. Now don't get me wrong. I have nothing against drinking and partying, and I certainly was not hurt. It just felt like an invasion of my personal space, an assault on my person just because I was naked. I spoke to the doorman, who responded that these were not his customers and he therefore had no control over them. Right! I got the same response from the manager. I had had enough, so when I reached my boyfriend’s house I called the police and filled a complaint. Two officers arrived about twenty minutes later. Yes, by now I had dressed. I spoke with them, explained what had happened. They told me they knew the place, had experience with the management from numerous other complaints, aways found the management compliant, and would have a word with them again. They were very sympathetic. I then disclosed that I was naked when this happened, just so they would have the full story. The officer then told me, "That doesn't matter at all. You were still assaulted." I considered that a major victory and an affirmation of our right to be socially naked in public in San Francisco!

That following Friday I was on my way to do some grocery shopping when I ran into my good friend Richard. We stopped on the corner to chat for a few minutes. He cautioned me that there were police officers a few feet down the street, as, once again, I was naked. I replied that I had spotted them as well, but was sure they would not bother me as I was not doing anything wrong. Minutes later we were approached by two officers. It is interesting the way the police work. One stands slightly back, arms folded, observant and silent. The other engages. He told me of the “tons” of complaints they receive in the neighborhood about “you naked guys.” He apprised me of the fact that if someone were to complain about me, and they were willing to sign a complaint, then they would be forced to arrest me. I enquired if they had received a specific complaint about me at this time, to which the officer replied that they had not, that this was just a “friendly little chat.” I asked the officer if he was aware that I was, in fact, breaking no laws? He responded that yes he was aware of that fact, at which time the two policemen choose to walk away.

I find it difficult to believe that the police fail to see the disconnect in the logic of there thinking. Yes, I can understand that they must respond to complaints, but how can they expect to initiate an arrest when they know that what is happening is not illegal? What would I be charged with? It has been suggested the police would charge nudists with creating a public nuisance if a complainant was willing to sign a complaint. If the officer’s very own statement that I was not in fact, doing anything illegal were true, I am not sure how this public nuisance arrest would even apply. The positive outcome of this were the two separate individuals who came up to us after the police had departed, first a man, and then a woman, both saying they had been watching the police speaking to us and wanting to know if they had hassled us and if I was all right. It is nice to know that there still exists support for freedom of expression in the Castro neighborhood.